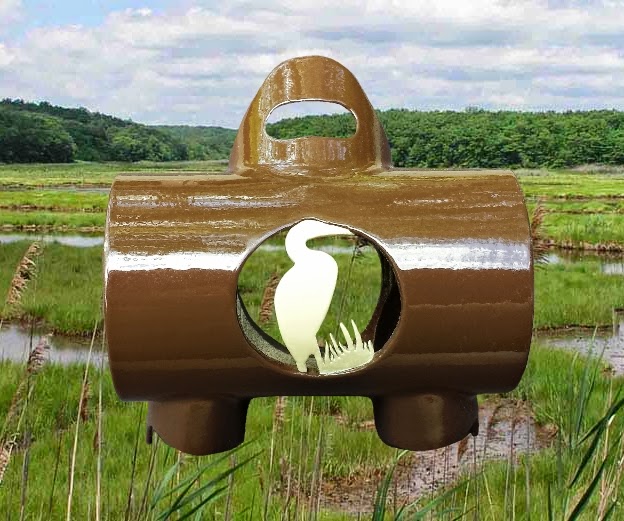 Here's a great article about Eddy from Oui magazine about forty years ago. 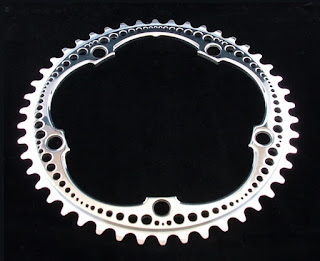 This is a chainring that we customized for a fixed gear bike that is being built by Wabi Cycles in .  It was originally black.  We removed the color and drilled the hole pattern.  The owner is on his way back from an extended stay in and has been looking forward to seeing his new machine.
Posted by Tom at 4:32 PM

This is a derailleur that I did for a display at the Big Stampede Bike Expo in Charlotte, NC. It has been buffed and the jockey cages were drilled.  The inlay was done with two colors of Mother of Pearl. Of all the pieces I was showing, this one seemed to draw the most attention. 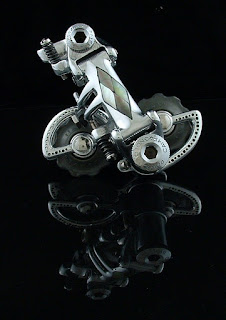 Here’s something different that I did to a seatpost.  I milled out a depression for the brass butterfly charm to fit into and blasted a scanned image of the same butterfly around it. 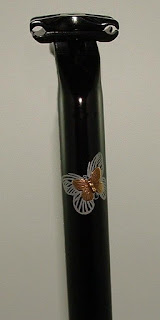 These are the completed crank arms for the Follis mentioned below.  The indentions that Campagnolo mills into the five arms of the spider were cut all the way through.  Then the backs of both arms had recesses milled into them. 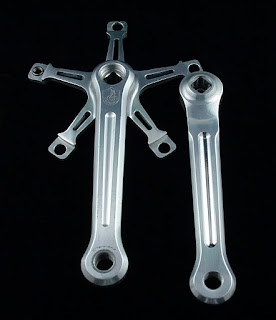 This is a project for a client with a Follis track bike that will be used for points racing.  The stem has the Follis logo that was parallelogramed by the manufacturer.  We milled a flute into both the top and bottom of the extension. 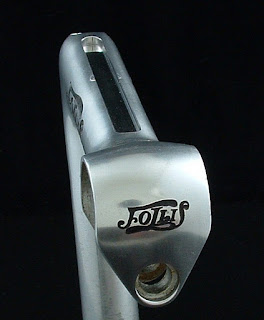 Below is a Campagnolo seatpost for the same bike.  We milled flutes and dots into the sides of the post which was then buffed.  We then cut a section out of the top and followed with sandblasting to reproduce the original Campy finish.

Here's a link to some photos of Dale Brown's 2011 Classic Rendezvous Weekend, which even includes more up to date pictures of yours truly giving a talk before a humongous crowd.
Posted by Tom at 11:33 PM

This is a Silk Hope frameset built up with Campagnolo components.  This bike was customized as a special project for the 2011 Classic Rendezvous Weekend in Greensboro, North Carolina.  It is on display at Bisbee Bicycle Brothel in Bisbee Arizona.  Special thanks go out to Ken Toda of Huemax Company for these excellent photographs. 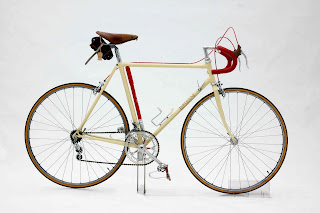 The chainrings have been drilled with a repeating pattern of one large hole followed by two vertical small holes.  Red stained wood has been inlaid into the five arms of the spider, and the hub in the Campagnolo logo on the crank arm has been inlaid with mother of pearl. 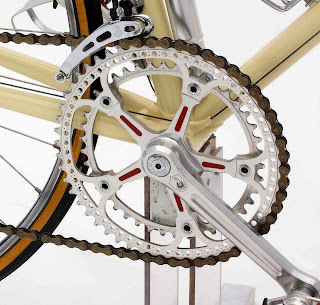 On the front derailleur two cutouts were made in the seat tube clamp that match its shape.  The back of the clamp (not visible) has been drilled with a series of holes. 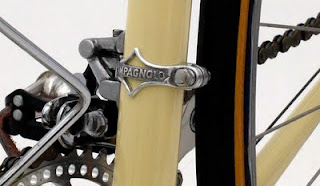 On the rear derailleur the front of the parallelogram was filed smooth and polished before etching the Silk Hope logo onto it.  The jockey roller cage was drilled. 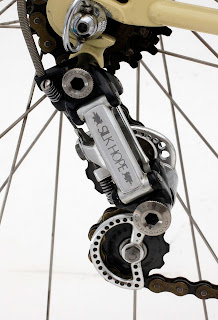 The lettering was removed and the surface buffed before drilling a set of three holes in each shift lever. 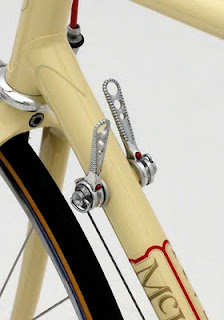 The Silk Hope dragon logo was etched into the front of the stem. 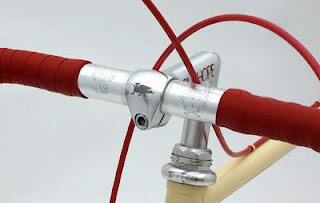 The sides of the stem were etched with the text logo and painted with baked red enamel. 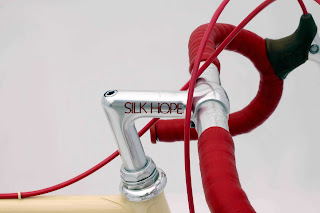